Trekkers, what to eat while migrating on The Nomad Way- Turkey Nomadic bags are a very important part of nomadic weaving culture because it reflects not only the functionality and durability of these objects but tat the same time the aesthetic perception of nomadic women to ornament their entourage in the best way possible even for simple and non-luxurious materials.

The nomadic sack is a big subject to observe by itself because it is placed in the middle part of the nomadic life and includes two essential moods of it as the use in the migration and in the settlement. Function-wise those sacks are the carrying units for the belongings of the tribesmen. They are placed as a couple in the back of camels, each one on one side of the animal. They are attached to each other by the bands that they have, sewn onto themselves. The bands are reciprocally wrapped to each other after being overpassed from the top of the camel saddle. On top of the filled up sacks the other flat materials such as bedding mattresses or the tent fabrics are put. A cover named “perdeh” is covered onto the load and a 6-7 meters woven band is wrapped over to keep all of the load packed together. After the camel stands up, all of the load based on two full sacks is fixed and safe. 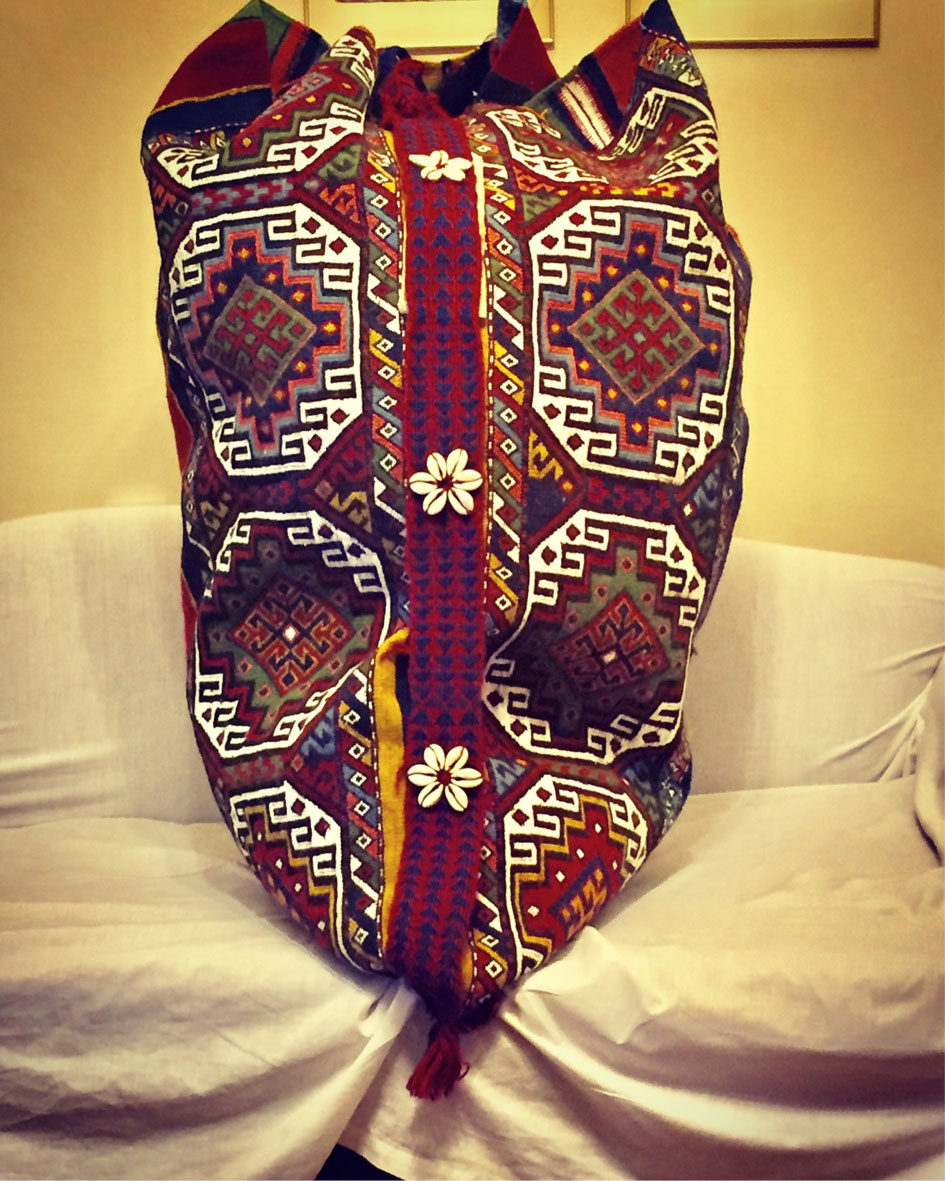 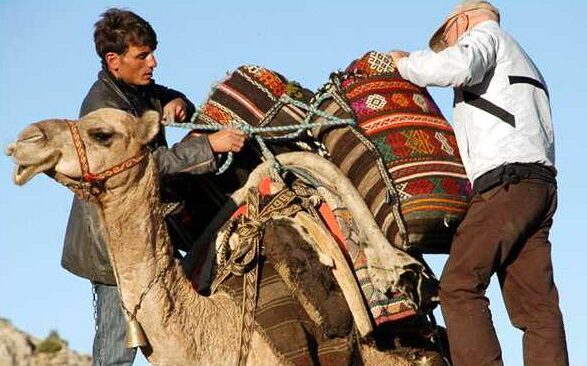 The nomadic sacks are attached to each other, by using bands on the back of the camel, Sarıkeçili Turkmens, Mersin, 2010s, Southern Turkey 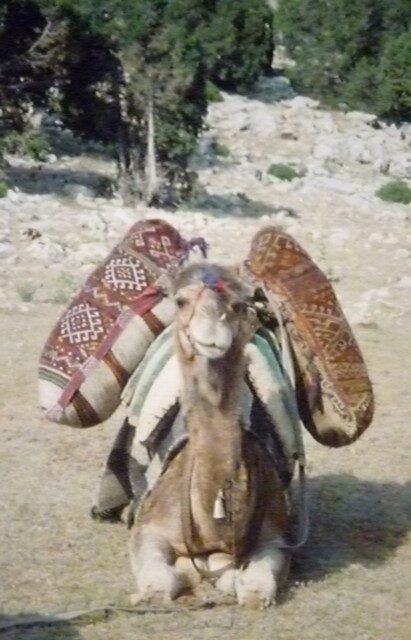 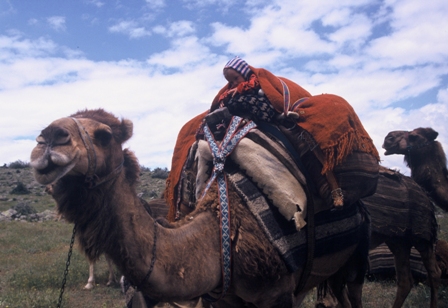 The other function of those nomadic sacks is the “cabinet function” the personal belongings of the tribespeople are stored in the tent during the seasonal settlements. The pattern and the color as well as the placement of the sack reveals the content that the sack stores. The flour sacks are generally white and woven in the weft face kilim technique in order to prevent the flour to come out. The sacks that contain grains and the different kitchen utensils such as cauldrons, and small casseroles or pans are black goat hair and warp-faced. These two types of sacks are put on the right-hand side entering from the tent door. The most colorful ones hold the personal belongings and often clothing of the tent dwellers. And they are put towards the center of the long edge of the tent which is on the opposite side of the tent door. Those extremely decorated sacks are woven by sumac (generally offset reverse sumac) technique. They form a colorful and decorative platform once placed side to side. They form also a cushion-like surface to lean back when seated on the floor seats. 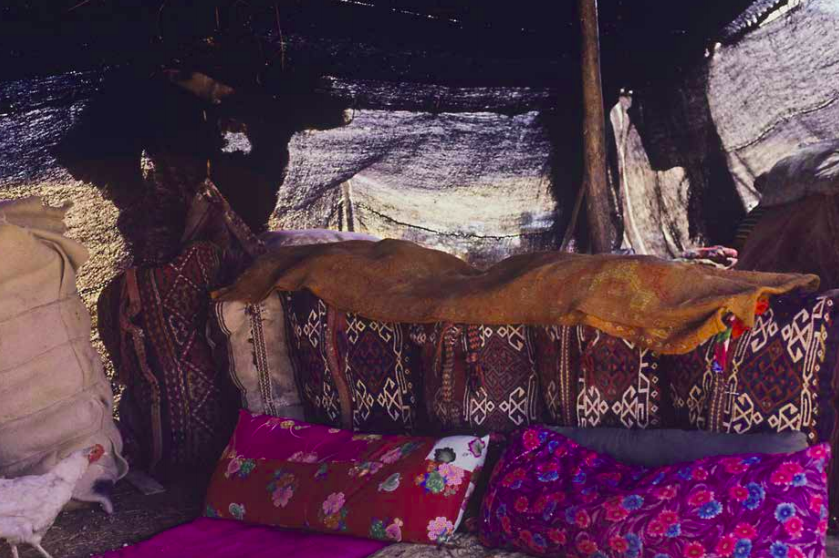 Another important bag in both nomad and sedentary rural life is “heybe”. Heybes are two-sided saddlebags united from the middle. The loaded sides are left along the sides of the horses, donkeys, or mules. The technique and materials used to weave heybe vary depending on the regional traditions, and the economic level of the possessors. The rich people have multicolored and elaborated heybes such as pile carpet ones. The poor families have generally coarse striped warp-faced heybes. Heybes may have very different dimensions and can contain anything needed to be carried. 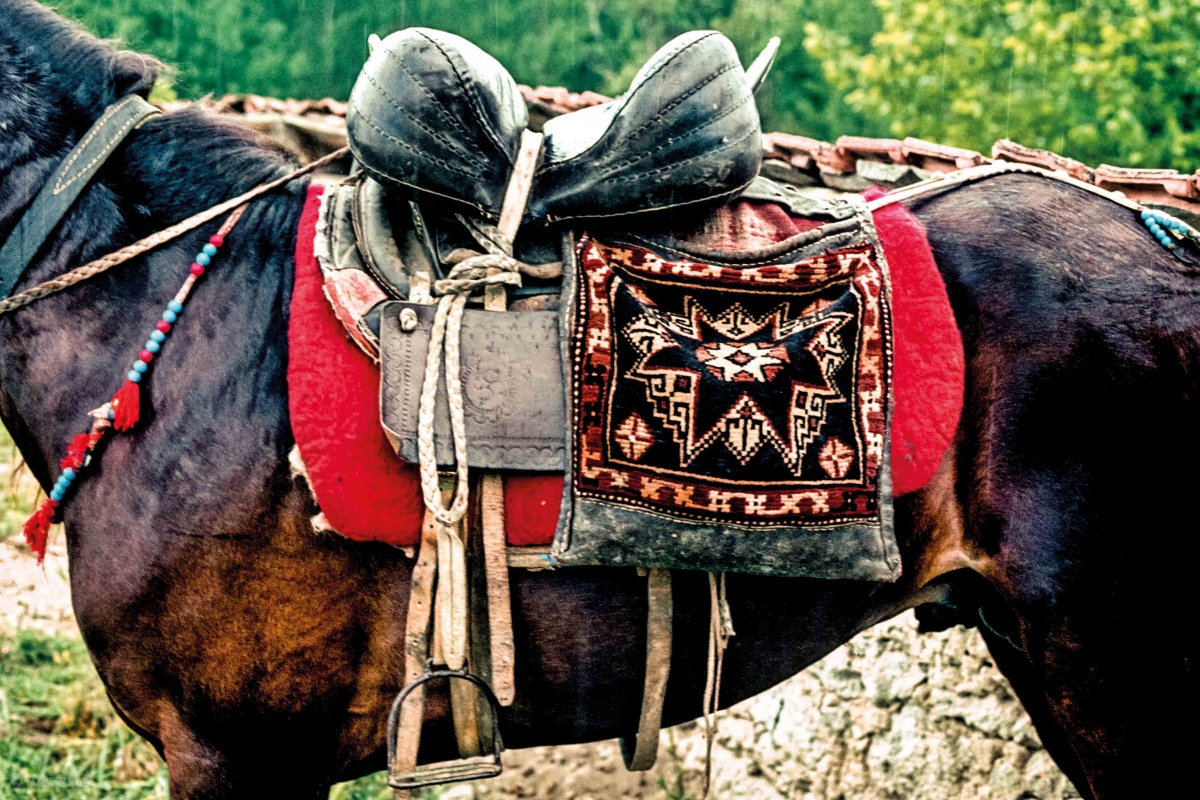 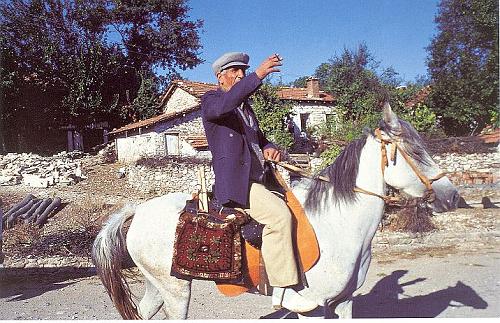 The usage of heybe in the horseback, Western Turkey, 1980s 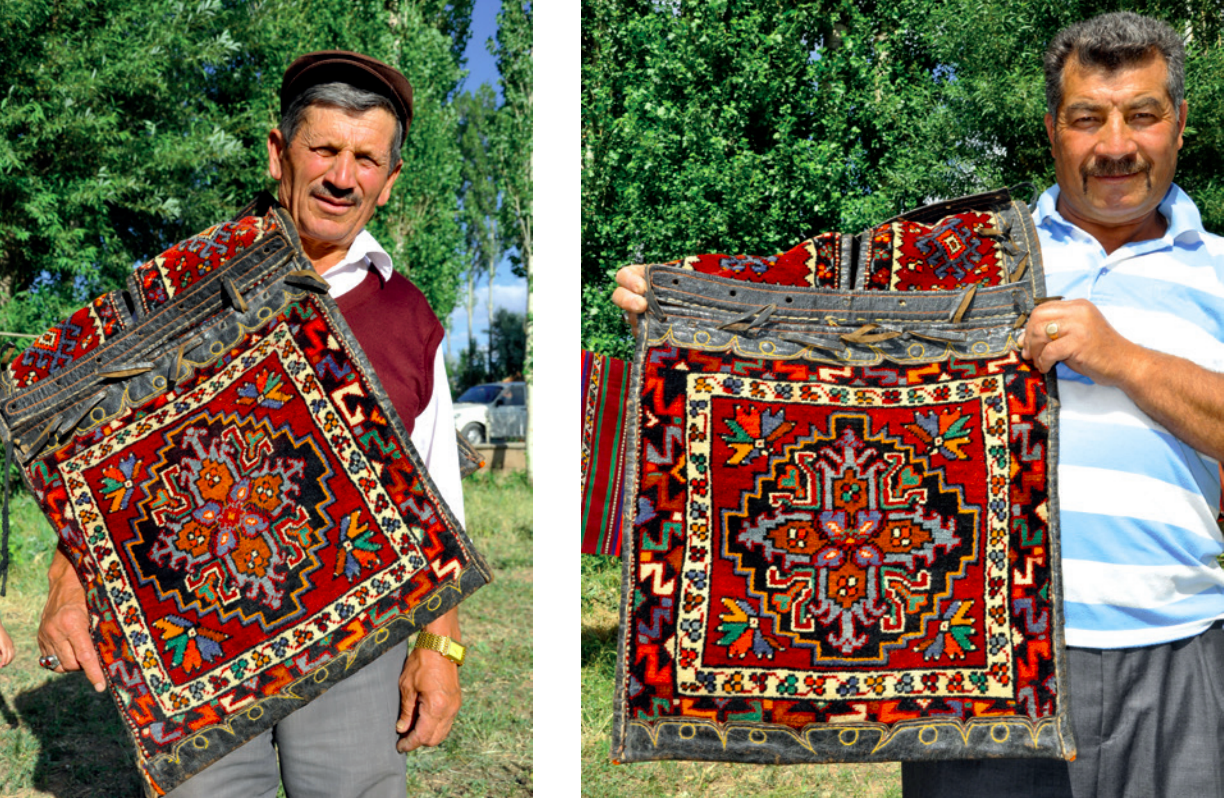 The usage of heybe on the shoulder as a carrying bag, Sivas, East-Central Turkey, 2010s 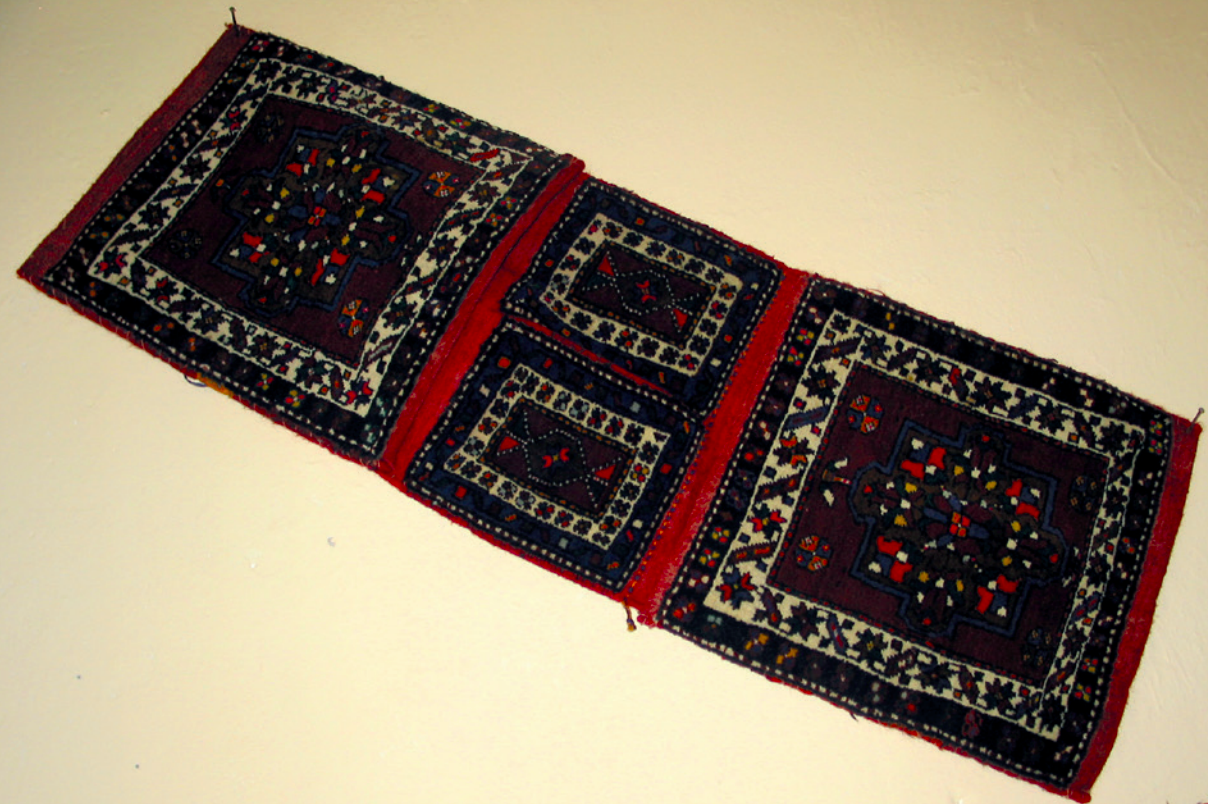 Vanity bags are generally woven in the form of an envelope with a shoulder handle and are daily used to carry personal belongings such as comb and mirror for ladies, pipe, and horsewhip for men or simply daily food for shepherds or can be used as Koran holder for elder people. Like heybes, they can be of different sizes or techniques but they reveal more the social status of the possessor within the society. So come vanity bags have some silver thread or some beads to show the wealth of the person who owes it. There are other bags traditionally produced and used in the nomadic life such as spoon bag, spindle bag, roller pin bag, and shears bag. All of these utensils are dedicated to some duties generally given to one gender or the other within the society. And people come together in rural areas to share the workload and help each other in exchange. At this point, these bags are a way to express not only the aesthetic approach of the producer but also the wealth and the weaving abilities of the producer (who is generally the user/possessor) to the other members of the society. 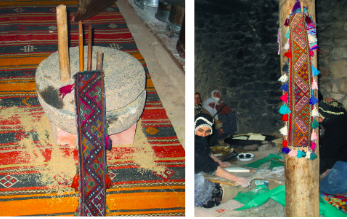 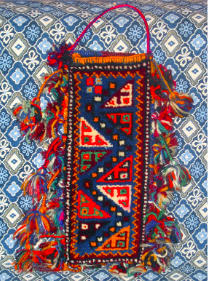 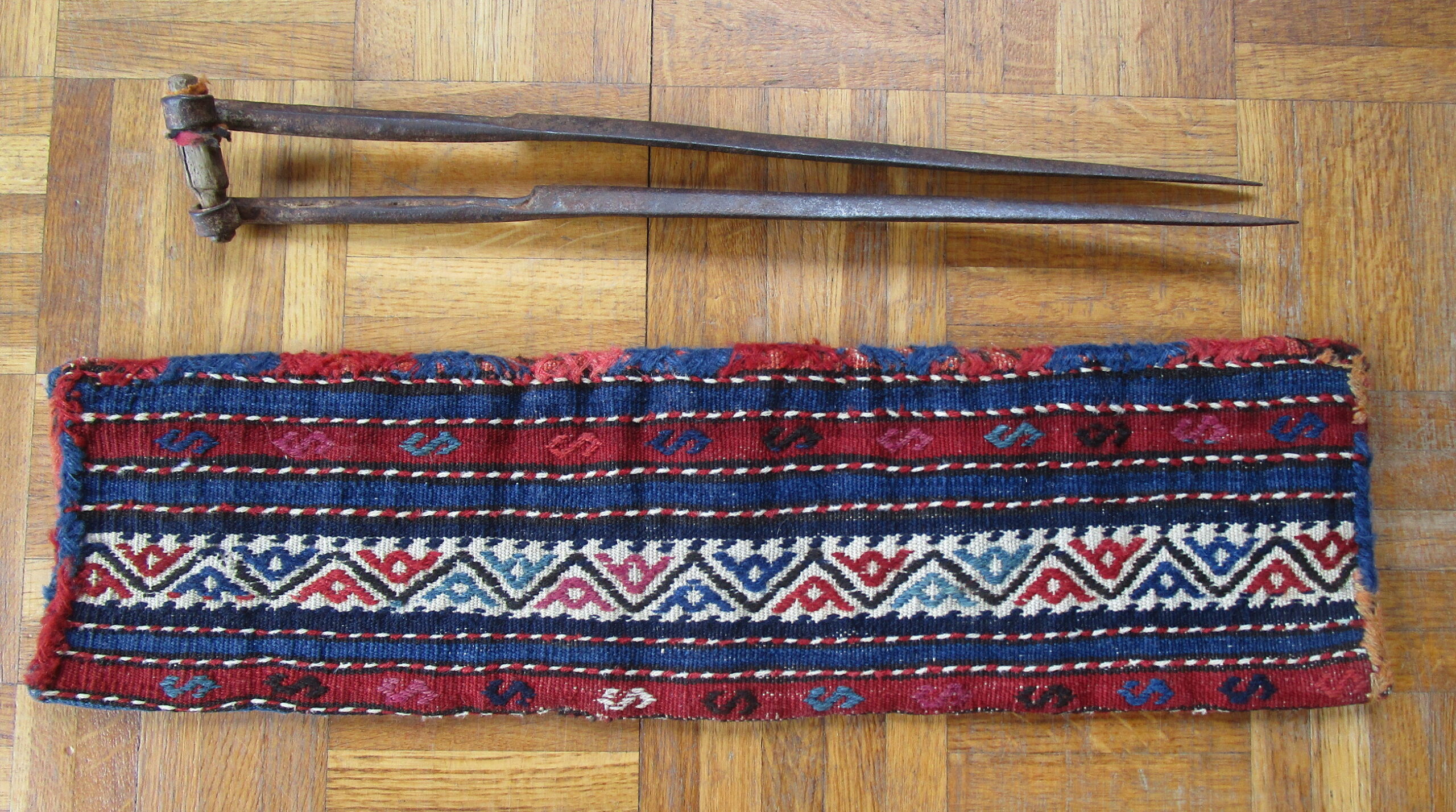